The Uzi is a submachine gun, featured in both IGI games.

Uzi has a rate of fire of 900 RPM, but is highly inaccurate. So it should be used only for close quarters. Its ammo is shared with Mp5SD3 and Glock 17. It is usually found in the hands of security guards (enemies with red caps).

Uzi's rate of fire is now reduced to 600 RPM, but it has still poor accuracy. Furthermore, it is not useful for silent approaches as it is not silent. It is found in the hands of Libyan guards. 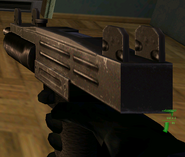 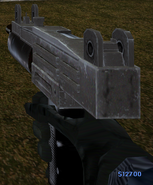 The Uzi in IGI 2
Add a photo to this gallery
Retrieved from "https://igi.fandom.com/wiki/Uzi?oldid=13209"
Community content is available under CC-BY-SA unless otherwise noted.