The Type 64 is a silenced submachine gun, featured in IGI 2: Covert Strike. It is equipped by Chinese special forces.

Type 64 has an exceptional rate of fire of 1800 RPM, which means it is able to fire 30 rounds in one second. It is found in the hands of Chinese special forces.

It also has a fire mode selector, allowing players to use different fire modes depending on the situation and ammo. Burst mode is useful while conserving ammo and dealing with less enemies, while auto mode could be used to deal with large number of enemies. However, automatic mode is not recommended since it drains ammo quickly due to high rate of fire.

Despite it silenced nature, enemies close to the player could still listen to the shots. Furthermore, an enemy not killed but injured by it could alert other guards too. 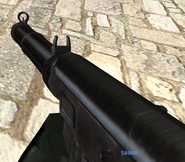 Retrieved from "https://igi.fandom.com/wiki/Type_64?oldid=13136"
Community content is available under CC-BY-SA unless otherwise noted.