The Smoke Grenade is a harmless explosive that temporarily generates concealing smoke in order to hide players from enemies.

Smoke grenade is only available in multiplayer. Like a hand grenade, it must be armed and thrown, shortly after it will deploy smoke. The playable character can be heard coughing when in proximity of the smoke, though no damage is dealt to them. 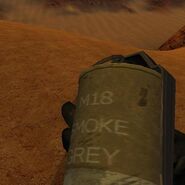 A smoke grenade being held in IGI 2
Community content is available under CC-BY-SA unless otherwise noted.
Advertisement