Major Rebecca Anya (1965) is one of the female officers operating in the IGI agency headquarters, and spends most of the time in front of the monitor as David Jones's Mission Director. She has a typically cool manner of soldiers and does her job well, who directs Jones clearly and objectively ensuring that he completes his missions and objectives successfully, without further dangers or failures.

She maintains contact with David via radio, in IGI 1, and in IGI 2, appears onscreen his Map Computer via a satellite-linked video feed. She is always attentive to the events that occur while David is in the field, by monitoring David's microphone feed. (as seen in IGI 2)

Anya is David's Mission Director for every mission in the game and appears only in cutscenes. The only time she appears within a mission, is in the final mission of IGI 1, and with the help of her understanding of electronics, she defuses the nuclear bomb set by Ekk which would have otherwise destroyed Europe entirely.

At the end of IGI 1, the player is left unsure whether Anya lives or dies, as in the final cutscene, David and Anya are seen resting on the floor of Ekk's secret base, with Anya seen keeping herself alive using the Medipack.

Anya's survival after IGI 1 is further left unverified, as at the start of IGI 2, Phillip White works as David's Mission Director, replacing Anya. Many hours into the game, after the betrayal of White and Quest, Anya's voice is heard on David's satellite radio, confirming her survival and return to IGI. From then on, Anya replaces White as David's Mission Director, and guides him through Campaign 2 Libya and Campaign 3 China and the rest of IGI 2, enabling him to successfully work his way through his missions.

Anya also suspects inhabitants of the Spratly Islands in Vietnam to be running suspicious activities throughout the time. What Anya said was quite true; David found his previous mission director White cooperating in secrecy with a Chinese general, whom he found out later to be General Wu Xing. Anya later asks David to disable the EMP system contained within the Chinese rocket, before rocket launch to prevent an international security issue.

She appears in the final cutscene saying "Someone's got to take care of you, David", the only time in the IGI series when she implies romantic interest in David. 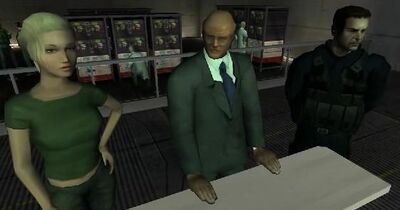 Retrieved from "https://igi.fandom.com/wiki/Rebecca_Anya?oldid=12883"
Community content is available under CC-BY-SA unless otherwise noted.