The RPG-7 is a shoulder-launched rocket-propelled grenade weapon, that is frequently used in anti-tank combat. It is featured in IGI 2:Covert Strike, though appears in the game directory of Project IGI.

RPG-7 is used by Chinese and Libyan special forces. It is also found in Ambush level. It has a good low range scope, and also holds multiple rockets at a time. Unlike the LAW 80, it can be reloaded and reused, having a maximum of 3 rockets available. 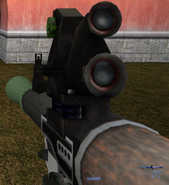