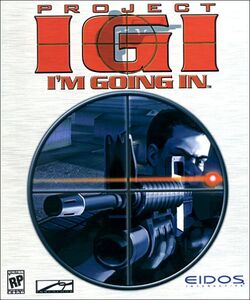 Project I.G.I.: I'm Going In (released in Europe as simply Project I.G.I.) is a tactical first-person shooter developed by Innerloop Studios and released on December 15, 2000 by Eidos Interactive. It is one of the first computer games to feature realistic weaponry and tactical combat situations.

Pursue and defeat a homicidal ex-Russian Colonel before she turns Europe into a nuclear wasteland in Project IGI: I'm Going In. This first-person shooter emphasizes stealth and guile instead of massive firepower. Jones has to sneak into the toughest military installations in Eastern Europe, and once inside, use his skills in thievery, computer hacking, sabotage, and reconnaissance to stop the madwoman. The enemy's Artificial Intelligence will react to his every action and use military tactics to track his position. In order to counter its surveillance, bunkers, tanks, and gunships, Jones is equipped with NATO spy gear and assault weapons. If the odds get stacked too high against him, he can call in a napalm strike via his Map Computer.

Upon release the game garnered mixed reviews due to a number of shortcomings, such as poorly programmed Artificial intelligence, lack of a mid-game save option, and the lack of multiplayer features. However it was praised for its superb sound design and graphics, thanks in part to its use of a proprietary game engine that was previously used in Innerloop's Joint Strike Fighter. It was followed up in 2003 by I.G.I.-2: Covert Strike.

While none of the individual elements of Project IGI are particularly original, they're meshed together very well. The missions feature a finely paced balance between tense stealth and dramatic combat. By mixing military firefights with careful sneaking, the game manages to be entertaining overall, and the environments are very convincing.

The narrative is primarily told through in-engine cutscenes at the beginning or end of each mission, and they're visually stylish - their dramatic camera angles and lighting effects approach film quality at times, though the flat dialogue amongst the characters can be tedious.

The tone of the missions tends to be realistic: While David Jones is a skilled agent, he's just one man - not a one-man army. As such, he'll need to do a lot of creeping through the shadows, sneaking around security cameras, hacking computers to deactivate surveillance systems, and using binoculars to scout the area.

When Jones runs into the inevitable confrontation with guards, fast and furious firefights ensue. The game's general emphasis on realism means the player will need quick reflexes. Even if Jones is wearing body armor, a few shots can still put a painful end to the hero's career. Jones health can be restored only by grabbing Medical Syringes from an infirmary, if there even is one in the area. This is a strictly single-player game with 14 missions that are often large and complex, but they're divided into smaller, more manageable objectives.

Since Jones will typically be infiltrating military installations, he'll run into swarms of guards, many of whom stand waiting in towers with their sniper rifles. Death awaits at every corner. The abundance of guards is necessary because the game's enemy Artificial Intelligence is spotty if not downright poor, as enemies sometimes stand obliviously when you kill one of their comrades, who is only a few feet in front of them. Also, the game sometimes cheats by making guards appear out of thin air or from buildings that you've already cleared.

Unfortunately, there's no way to save games during a mission, and even on the lowest difficulty setting, some missions can be quite hard, and they will inevitably require the player to restart from scratch a number of times before achieving success.

During missions, you'll have access to a large arsenal of weapons, some of which you're equipped with at the start of the missions, and many of which you pick up from dead guards. They run the gamut from a combat knife for silent kills to antitank weapon for the occasional armored fighting vehicle. Other real-world weapons in the game include the Glock 17, Desert Eagle, MP5, M16 A2, Minimi, Spas 12, Uzi, Jackhammer automatic shotgun, Dragunov sniper rifle, and others, along with flashbang and fragmentation grenades. Weapon physics are generally believable: Automatic weapons have a noticeable kick that hinders your aim, and bullets will penetrate walls and doors of varying material and thickness depending on the caliber or muzzle velocity of the gun.

Since much of the game is about stealth and careful observation, you'll get to use some clever gadgets in addition to your weapons. Your binoculars have night vision and a digital compass, and they smoothly zoom out to very long ranges. You also have a Map computer that lists your mission objectives and visually keys them with numbers to a live satellite video reconnaissance feed. You can zoom and pan the readout, and since it's shown in real time, you can actually watch guards advance and attack you if you neglect to turn off the map at an inopportune time. The map computer also logs your communications, which include both status reports and tips from Anya, your mission director back at headquarters who's watching your progress. Frequently, reports from Anya, including those that advance the game's plot, appear when you're busy avoiding or fighting guards, so the ability to read them later on your map computer helps make up for that flaw.

When you stand next to an object you can use, you'll see an icon light up at the bottom of the screen. During time-consuming actions like hacking a computer or climbing a ladder, the game switches from first-person to third-person view, which can seem awkward initially. However, this lets you retain situational awareness during these times since you can pan the camera in all directions with the mouse. You do need to precisely line yourself up with an object to manipulate it in the first place, which can result in your death if you need to make a quick escape.

The graphics overall are very good. Textures are highly detailed, varied ambient lighting depicts different times of day and atmospheric conditions vividly, and weapon models and skins are convincing. Weapons interact visually with the environment too, and they will shatter glass and leave bullet holes in walls for the duration of a mission. When you fire at wood or other light materials, shards and splinters fly. Some of the weapon effects are also quite graphic: You'll see blood spatter on walls during close-quarters firefights, and sometimes even pieces of cranium fly when you snipe someone in the head. Oddly, the bodies of dead guards simply vanish after a few seconds. Some of the effects are less gruesome but still memorable, such as the occasional static on your map computer as you watch the live satellite imagery and the dynamic displays on your binoculars.

The vast outdoor environments really steal the show in Project IGI. Some design concepts for the proprietary 3D engine came from Innerloop's flight simulator, Joint Strike Fighter - and it shows. Early in the game, you'll infiltrate a military airbase with a seemingly endless runway, a geodesic radar dome, huge hangars with parked fighter jets, troop barracks, and so on, all of which are surrounded by realistically scaled and subtly textured hills and mountains. This huge visual scope is really immersive and memorable, especially since the outdoor terrain is so well textured. By contrast, the indoor environments in the game tend to be repetitive and forgettable. Also, because of the huge areas, you'll have to do lots of laborious running.

The sound compares favorably with the graphics - it is sometimes even better. The musical score, while hardly outstanding, is nevertheless well crafted, and its tense mood complements the action of the game well. Voiceovers are competent but bland, and Russian or Estonian guards will shout at you in English instead of their native tongues. The sound effects suffer none of the weaknesses of the dialogue; in fact, they're often spectacular. Each weapon has a convincing and vivid set of sounds, and explosions are suitably loud. Footsteps alter according to the surface on which you're walking and whether or not you're running or padding softly. The environmental sounds are superb - gates grind, motors hum, security cameras beep, and elevators chime as they reach a new floor. Intermittent thunder will boom during a rainstorm, and depending on what type of roof you're under, the rain alters from muffled tapping on wood to loud drumming on a sheet metal overhang. The sound is especially well done during cutscenes - for instance, helicopter rotors nearly drown out characters' radio communications, and you can hear details like the canopy lowering on a Russian fighter as you make off with it.

David Jones is sent off on a mission to the former Soviet Union to find Josef Priboi, a Russian arms dealer who is believed to have vital information on a stolen nuclear warhead. As he helps Captain Harrison apprehend Josef, he discovers that the brains of the operation is Josef's uncle Jach Priboi, whom Jones then attempts to apprehend instead.

Jones discovers Jach's location by planting a virus in Jach's communications center. While Jach Priboi is taken away in helicopter by Jones, he is shot down by Ekk, a homicidal Russian. Jones then has to clear the border and find his equipment. He then hijacks the train carrying Priboi and takes him in for interrogation. Learning about the involvement of Ekk, he sets off to catch her and find the nuclear weapon.

Ekk escapes on her first encounter with Jones, but Jones is finally able to track her down, and kills her after infiltrating her second hideout. In the meanwhile Jones' mission director, Anya defuses the nuclear warhead that Ekk set into motion.