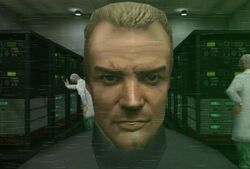 Phillip White is David's Mission director at the IGI headquarters, and a good friend, who later betrays IGI, under the command of General Wu Xing.

Phillip was born in 1955, and moved on to become a student in Harvard Business School, where he left as an undergraduate. He went to Key West, and became a US Marine. He served in Vietnam and Cambodia, and was later honourably discharged from the Marines. It was during this period that he specialised in organizing smuggling operations and money laundering. Subsequently, he became a reputable figure in the US underworld. In 1985, he retired to a small island in the Gulf of Mexico, where he effectively disappeared.

He guides David sincerely throughout all the missions in Russia to recover the stolen EMP chips just to obtain the chips for himself and Robert Quest, his close comrade. Both of them infiltrated the IGI for decades and had earned great trust in the agency just to wait for the very moment. After betraying David with Robert, he and Robert escape for sanctuary in China, where they obey the command of General Wu Xing and hand the EMP chips to him at Spratley Islands. Finally, he is killed by General Wu Xing for accusing the general of killing Robert, while actually Quest was killed by Jones in Egypt.

"How's the weather out, Jones? Hope that Russian wind hasn't frozen your equipment."

"Well, well, look who's back. I was starting to think you'd got a better offer." (to Jones)

"An impressive display. I’ve got one more job for you."

"Ah, good of you to take care of everything thoroughly, Jones! Now I have blueprints, there's nothing more IGI can offer me. I am handing in my resignation, effective immediately."

"General, it was a routine job! Quest has gone missing and you don’t give a damn?"

"I have been loyal to you for three decades and so has Robert. Doesn’t that count for anything?"

"You’re lying, it’s you, isn’t it? Our cover was blown, he was useless to you the moment you get the chips in your filthy grip. You’ve had him killed!"

Camera footage of White and Quest