Player starts with it

‘Mp5’ redirects here. You may be looking for its noisy counterpart in IGI 2, MP5A3

The MP5SD3 is a full auto sub machine gun, featured in Project IGI. It is the only weapon in the game with a silencer built into it. Its noisy version, Mp5A3, is present in IGI 2: Covert Strike.

The Mp5SD3 is given to the player at the beginning of most of the missions, and is the only weapon other than the Dragunov to be silenced. It also has a medium range zoom option, allowing players to use it at long ranges too.

It is neither found on any enemy nor has a pickup. However, its ammo is shared with Uzi and Glock 17.

It is also found in IGI 2: Covert Strike as Mp5A3, its noisy version lacking a scope. 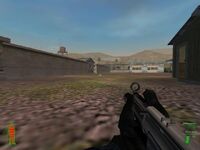