IGI2 1 Infiltration
The MAC-10 is a machine pistol found in IGI 2: Covert Strike.

The MAC-10 is found in the hands of Russian guards. It is useful in close quarters, but could also be used at medium ranges. Due to its automatic fire, it could be used effectively against a medium group of enemies. However, it is not effective for stealthy approaches as it is not silent. 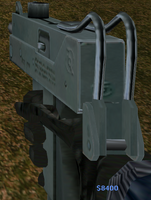