The M2HB is a fixed heavy machine gun which is mounted on the ground or on open-side helicopters. It is featured in both IGI games.

In real life, the M2HB is not used by the Russians. Their primary heavy machine guns are the NSV and Kord.

The "M2HB" name is not used during the gameplay, as it does not have a HUD when equipped. When equipped, it provides an unlimited ammo to the shooter, but has no crosshair for aiming. It is referred to as the Sentry Gun in the game directory. It is usually mounted in bunkers or balconies of guard HQ buildings.

In IGI 2: Covert Strike, M2HB gains a unique crosshair, along with HUD. However, it has limited ammo now, which is usually in thousands of rounds. It is mounted on the ground, or open side of a helicopter. 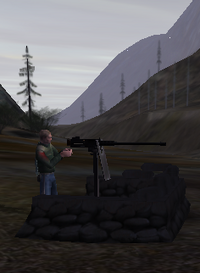 Retrieved from "https://igi.fandom.com/wiki/M2HB?oldid=13149"
Community content is available under CC-BY-SA unless otherwise noted.