The LAW 80 is a shoulder-launched one-shot anti-tank weapon, that can destroy a light or medium tank with one direct hit. Its rockets create a huge explosion, upon impact alerting nearby guards.

The LAW 80 is primarily used to destroy enemy tanks and destroys them in a single hit. Usually, if there are tanks in a level, a LAW 80 will be present in order to destroy it, though is not always the case.

The weapon has a dark green-brown color in the game, and can hold up to three rockets. In real life, however LAW 80 can only hold and fire a single rocket.

LAW 80 is only available in multiplayer mode. Just like its real life counterpart, LAW 80 in game can only carry a single rocket. After firing one rocket, the player throws it away. Its color has been changed to light green with "LAW 80" written on it. 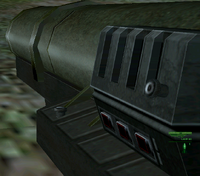 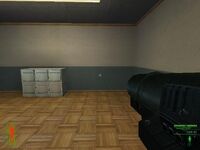 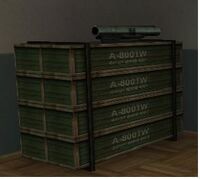 The LAW 80 makes its first appearance on a cabinet in an 'office building' during mission 6 of Project IGI
Add a photo to this gallery
Retrieved from "https://igi.fandom.com/wiki/LAW_80?oldid=13148"
Community content is available under CC-BY-SA unless otherwise noted.