Pancor Jackhammer
The Jackhammer is a prototype automatic shotgun with a quick reload time, that fires multiple pellets with every shot creating a large fire-area, about the size to kill two men with a carefully aimed shot. It holds 12 shells per cylinder in both games, unlike its real life counterpart, which holds 10.

Jackhammer is the ultimate shotgun; its automatic fire makes can clear out crowds in seconds. Lone enemies stand no chance against it. However, like the Spas-12, it has poor range, so it cannot be used for long ranged attacks.

Jackhammer is not equipped by any enemy, except a guard in Get Priboi. However, its ammo is shared with Spas-12, allowing the players to use it without lack of ammo since usually Spas-12 is also found in the level in which Jackhammer is found.

Just like in Project IGI, Jackhammer remains most powerful and effective shotgun. However, its ammo is no longer shared with any other weapon. It is suitable for non-stealthy approaches due to its lack of silencer. It is only found in the Libyan missions. It is not equipped by any regular guard but is used by Major Zaleb and Jach Priboi in the Zaleb's Stronghold and Prison Escape, respectively.

The Jackhammer in IGI 1. 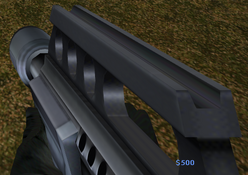 The Jackhammer in IGI 2. 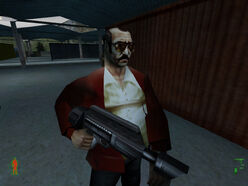 Jach Priboi armed with a Jackhammer.