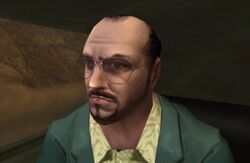 Jach Priboi is a middle-aged arms dealer and an old pal of David.

Jach kidnaps his nephew Josef to double-cross with Ekk. He has been taken by Jones in IGI 1 in mission 6 "Get Priboi" but Ekk takes him back in Mission 7 "Border Crossing". Finally, in mission 9, Jones hijacks a train and gets him once again. The reason Ekk kidnaps him is to find out the amount of threat posed by IGI. Later, Priboi gives Jones some important information about the nuclear bomb Ekk possessed, which ultimately led to defusal of the bomb and Ekk's murder by Jones.

Since the Russian fiasco, Jach had moved his illegal weapons trade to Libya, where he was held captive by the Libyan Intelligence for the same reason mentioned above. While serving close surveillance in Libya, he unexpectedly encounters David who intends to rescue him out. He gets arrested by Libyan forces with Jones and by a surprise attack by Jones, flees the prison. He tries his best to assist David in every way and eventually recovers his important trade documents and also kills Major Zaleb Said in the end, fulfilling his intention and revenge. At last, he told Jones as a payment to his gratitude that Robert Quest was expecting a Soviet Ekranoplane at Port Bur Safaga in Egypt. 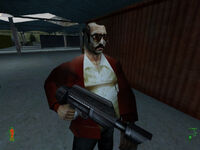 Jach Priboi as seen in IGI 1 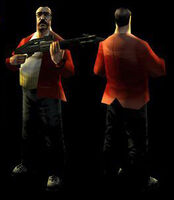 "That thieving son of a camel! Zaleb has taken all my files! I will show him what happens when somebody steals from Jach Priboi! I'll take it all back from his dead hand!"

"Funny. You will help me, and get your data back too. Major Said has an air base; he's probably taken my stores there — along with my helicopter. Get me my chopper and we'll both get what we want."

"You do have other thing to worry about, Jones. I need you to ride a shotgun for me. We're going to go call on the Major — I want my papers back! Once we are there, we can deal with Zaleb Said once and for all."

"It's all here! Now I can go about my business again. Although, perhaps not in Libya for a while..."

"Ok, ok, give me a second... ah! Here we are. Port Bur Safaga on the Red Sea, delivery at Pier 3 three days from now. The port was chosen because they are brining some cargo by sea. They are smuggling something, perhaps? I didn't bother to ask."

"What, you don't need old Jach any more? Ah, it's okay. It's against my ethics to attack customers."