Another big map, and another long mission. Tedious, but not brutal... yet...

Jones: You believe Priboi to be here?

Anya: Jones, I know. The virus you uploaded? It works like a dream. This is one of his more remote storage yards. Get this - he's currently holding a goddamn arms sale.

Jones: You're leading me into bad company - my mom warned me about ladies like you - they'd lead you astray.

Anya: And what happened?

Jones: I mainly got led astray.

Anya: Typical. Listen up. Priboi conducts all deals from his limo - it's bullet proof of course and located close to the gates. Should anything go wrong, Priboi has one plan, make a run for the open road and leave his men to do the fighting. I want to exploit this plan. Harrison and his men are setting up on the exit road. I want you to enter the base and create one hell of a noise. Priboi will run like hell. Harrison will intercept him, stop the limo and seize Priboi. Harrison has a chopper nearby. These are the mission parameters; Enter the base - you must maintain the element of surprise, that's crucial. Obtain explosives from the warehouse; you'll need these to create the right diversion. Then move to the fuel depot and create a diversion using the explosives. Priboi should bolt like a startled rabbit. Harrison will take him down.

Stay where you are. Zoom in and shoot the guard through the window once or twice. Three or Four guards will come out from the office building — shoot all of them from the same position as they will not be able to see you so they will not shoot you — even if you shoot them. Enter the building, open the second door and kill the guard, hide near the vending machine for a few seconds. The guard will again become alive. Shoot him again, then go into the next room (where you shot the first two guards). Pick up the AK-47's and get the LAW 80 on the green crates. If you do set off the alarm, open the next door. If the guard is standing next to the window (to your left), back off and wait until he walks over to the right. Killing him next to the window will set off the alarm. When you're out of the building, turn right and shoot the guard if he's there. Now run through the green boxes. When you hit the wall, follow it to the right until you come to the opening. Go in and run towards the building with the "red cross" symbol on it. Shoot the camera, pick the lock on the door, and kill the guy on your left seen after opening the door you just lock-picked.

Get the Medipack and Spas, then open the other door and run straight forward until you hit a green object. Use these as cover as you kill everyone in the garage with the AK-47 and/or Spas 12. Watch out for the guy behind the green crates. He's easy enough to kill, but if you run out to collect the weapons and forget about him, he can cause some major damage. Collect all the weapons, then jump into the truck and collect some proximity mines and some ammo. Pick up the C4 and leave the way you entered. Equip the Dragunov and hack the computer. At the entrance to the walled-in area, turn left and run to the barracks. Plant one or two proximity mines; One just to the right of the door works well. Now turn around and head to to the left of the jet. Take out your Jackhammer and kill the guard through the gate. Turn around and kill the guy who comes running at you. Kill the other three people for good measure. Use the keypad, enter the building, go down the ladder, use the computer, then leave the area. Turn right and follow the wall to the large grey pylon. Climb up and use the wire to your right.

As soon as you land, turn right and shoot the guy standing there. Switch to the Dragunov for a moment and kill two people in the fenced-in area. Slide down the ladder and run towards the helipad. Enter the barracks and kill the two guards inside. Run towards your next objective, climb the fence, and plant the C4 charges. Climb the fence directly to your left (to avoid the cameras), then run to the area with the limo and climb the fence there. Run towards the building and shoot the guard through the window. Now open the door and kill another standing next to the green crates. Turn right and open the door. Search the file cabinets, then leave and head right, towards another door. Open that kill everyone, then run up the stairs and search the file cabinets there.

Note: You can destroy Priboi's Limo with a LAW-80 but this will cause the mission to fail.

The start of this level can be really frustrating. You shall enter the compound and probably you start with trying to go in through the Office building. You can do that, but it's very difficult to manage without setting off the alarm and have respawning guard clustering about. Furthermore, if the alarm is triggered a small tank will start patrolling. Disable the tank as soon as possible with a LAW. Below is a description on how you can manage to get into the base via a "sneak route". But if you decide to force your way through the office building then here are a few tips...

Equip yourself with the Mp5. Walk straight ahead (west). Go behind the hill so that you won't get spotted by the guards in the office building. Observe the camera and run towards the door of the office building when the camera is facing away.Kill 1st guard,2 more guards will come from building. Kill them, Destroy camera, and enter in building. In 2nd room kill guard with Mp5 and move to next room. Pick LAW and exit building from where you had came.Come out and move right. Kill guard (see screen shot).

Go to gate towards east of building. Pick lock and enter. Shoot the tank with the LAW.

Continue towards the large warehouse. Go around the wall. Don't enter the warehouse yet. There is a guard patrolling around the crates under the shelters. You can see him on your map when he walks between the shelters. To play it real safe, hide behind one of the closest crates. Look at map to see when the guard walks from the western shelter to the eastern (ie. when he has his back to you). If the guard is alerted he will run for an alarm button on the wall. be sure that he won't reach it. Pick up a LAW and 3 handgrenades from the top of two crates.

Continue to the door of the warehouse which is surveyed by a camera.

There are five guards in the big room. Some of them might not have been swept away by your grenade. At the other side of the crate you're standing close to is one. The other are lined up further behind the second machine gun shooter. Eliminate all of them and notice all the nice weapons they have; (AK47), Minimi, Dragunov, Spas 12 and Jackhammer. I've think that the Jackhammer is very nice to have in close combat, since it doesn't recoil as heavy as the Spas and you can fire several shots quite quickly.

Behind the machine guns you will find the C4s. At the back of one of the trucks you will find four proximity mines. At the top of a crate you will find two boxes of ammo. Walk back to the room you came from and use the computer to turn off the cameras. Exit the warehouse.

The next step will give you some extra time if the guards are alerted, and they will for some reason be if you exit via the route recommended by Anya. When alerted the guards will run by the fence towards the electricity pylon and then follow the wall to the power building (or to the northern gate).

Walk in a bow to the fence (ie. don't walk too close to the barracks, the guards might spot you). Place the proximity mines in a line along the fence (see screenshot) and then continue to the power building.

You don't have to bother with the three people standing close to the plane. They are civilians and won't hurt you or set off any alarm. Don't walk up to the gate immediately. Check your map to see when the guard inside of the wall has his back to you. If he spots you he will run to the alarm button at the power building's wall. After taking him out, turn around towards the civilians. A guard will come running. Shoot him and shoot the camera, then pick the lock of the gate and enter the power building.

One stair down, at the eastern wall is the control unit for the power. Go down and disable the electricity to the fences in the second compound by walking up to it and hit use button when you get that icon in the bottom of the screen. Exit the building.

Now you can exit the compound the same way you came in (unless you climbed the wire) or you can slide out on the electricity wire. If you choose to slide out, walk up to the electricity pylon. Use your dragunov to take out the guard standing at the next pylon. Climb the ladder of the pylon and slide on the wire to the next pylon. You can watch the guards coming out of the barracks just to get blown to pieces by your proxymines (if you didn't place them they might wound you a little). A helicopter will take off and a soldier will shoot at you from the chopper. He will not (or only slightly) wound you.

Don't slide down the next wire, instead take the ladder down. There is no use in visiting the barrack which is just down the hill. Keep to the right (east) and go past it. Continue down to the next compound. On your way down, snipe the guard in the watch tower and the one patrolling the area around the fuel dump. Go around the compound and climb the fence near the fuel cisterns. Set your C4s on the cisterns, starting with the westernmost. After setting the second, quickly turn around, climb the fence and run away from the cisterns. The direction doesn't really matter.

Go back to the compound. Equip yourself with the Jackhammer, climb the fence and enter Priboi's secure warehouse through the southern door. One guard is waiting just inside. Kill him and go around the crate. Two guards are waiting. One upstairs who can be a pain in the... and another one below him. When you finished them go up the stairs and open the door. In the corner are three file cabinets. Open all of them (use key). Walk downstairs and exit the door at the other end of the room. In the next room you'll find a guard to the left and behind the second door on your right is another guard and two file cabinets. Open any one of them and the level finishes with a cut-scene. In cutscene Priboi is arrested by Harrison’s men. 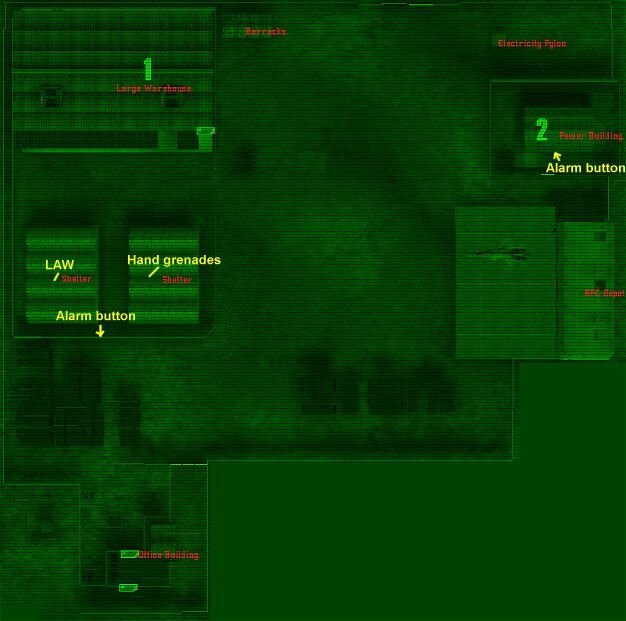 On crates under shelters: 3 handgrenades, 1 LAW

Large warehouse: Medikit +50, 2 boxes of ammo, 4 proximity mines (at the back of one of the trucks)and 2 C4 explosives.

There is a number of guns from the guards to pick up here; Spas 12, Jackhammer, Dragunov, Minimi and AK47