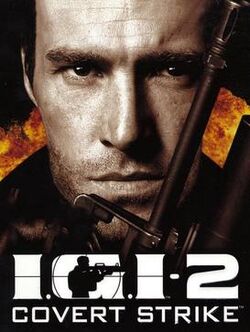 I.G.I.-2: Covert Strike is a computer game developed by Innerloop Studios and released by Codemasters in 2003. The game is a stealth-based first person shooter. It is the sequel to Innerloop's Project I.G.I.: I'm Going In. The original, published by Eidos Interactive, offered only single-player play with no save game feature. Chris Ryan, a former Special Air Service operative best known for being the lone successful escapee of Bravo Two Zero, served as a consultant to the game. The box art is similar to the poster for GoldenEye.

The game's plot features a rogue Chinese General, "Wu Xing" as the primary antagonist. Xing orchestrates various events (such as armed robbery of advanced prototype technology from the Russian mafia) in order to get Electromagnetic pulse (EMP) weaponry on a space rocket that he has launch control over. At the end of the game, the protagonist David Jones is finally able to defeat him and stop the launch. Probably because of this the game was banned in China, because it "intentionally blackened China and the Chinese army's image".[1]

The game was generally not well received by critics.[2][3]

2. Deep in the Mines

4. Bridge Across the Dnestr

13. Showdown at the Docks

The game is divided into missions, and the story is presented in cut scenes, shown before and after every mission, with animated characters rendered in real-time and pre-recorded speech. This approach is similar to other games in this genre, which don't rely on video, instead providing a comparable quality of visual and dramatic appeal, reusing the same in-game 3D engine for cut scene rendering.

Missions have objectives that must all be completed before the mission ends.

Straight-forward tactics are not encouraged, with stealthy and covert movement giving the player a better rating, rank and chance of survival, with the highest attainable ranking entitled David Jones.

Multiple paths exist for every mission, with the most obvious and daunting being a noisy gun-fight, because in every mission Jones is outnumbered anywhere from 20-1 upto 50-1. Every mission presents an opportunity for large groups of enemies to be bypassed or sneaked past, undiscovered. Certain missions even require entire operations to be carried out undetected, i.e. without giving enemies a chance to sound the alarm, as the name Covert Strike suggests.

At the start of a new game, a difficulty level can be chosen, changing the number of bullets Jones takes before dying, the intelligence of the enemy and group Artificial Intelligence, and the number of save-games available.

The player can use the available Map Computer to recon the mission area. The device displays a real-time satellite image of the terrain with structures and outdoor enemies clearly visible. This is important to plan strike routes, after monitoring enemy patrol routes. Using the Binoculars and Thermal Goggles, nearby enemies can be located, sometimes even through walls.

Jones is equipped with Lock picks, and Safe crackers making him capable of forced entry into any locked room or safe. This allows noiseless and stealthy entry into restricted areas and buildings, and helps obtaining military secrets or private information.

Remote-controlled CR-4 explosives are also available for use on certain ground targets. CR4 allows players to destroy certain large structures safely from a distance, leaving Jones undetected. Air strikes can be called for on certain missions, using the Laser Designator to pinpoint ground targets for bombing.

During gameplay, the player has access to a large arsenal of real world weapons, including handguns, assault rifles, sniper rifles, light machine guns and RPGs. Although these cannot be bought, the weapons available in game levels can be exchanged with carried ones.

Players begin missions with certain fixed or carry-over weapons from earlier missions. Additional weapons can be obtained from killed enemies. The player is required to assess future tasks and equip the most suitable weapons.

Like its prequel, realism was intended to be paramount in this game, which features more than 30 accurately modeled real-world weapons which look and behave exactly like they do in real life[4], including their rate of fire and loading times.

Bullets also perform and penetrate differently, based on their speed, weight and caliber, and target material: wood, steel, plastic or flesh, meaning players will be able to kill multiple targets with one shot or hit targets right through cover.[5] Targets are affected not only by Jones's movement and stance but also the calculated kickback for each weapon.

Only 2 guns can be carried at any given time and the rest have to be left behind, unlike its prequel where Jones could carry any number, promoting critical thinking and weapon understanding, as each weapon has very different strengths and side-effects.[6] In addition to the two chosen weapons, a Combat Knife is carried at all times and always available for use, enabling noiseless kills and hand-to-hand combat when out of ammunition or without guns.

As the Cold War drew to a close, the world believed that peace would reign across the globe. It seemed that a new age had dawned, an age of lasting unity between nations, but this was not the case. Instead the fight for global supremacy had only been forced underground into the battlefield of covert ops and evil acts of terror.

Into this arena sprung a new force. Masked behind the guises of subterfuge, plausible deniability and information management, the Institute for Geotactical Intelligence raised the sword against those who would subjugate the world.

Though the malignancy of terrorism has broken our world on occasion, the global crucible has not yet boiled over into World War III. For that thank the one-man army David Jones and the forever-unsung heroes of IGI.

Ex-SAS soldier David Jones is once again a man with a mission, to infiltrate key airbases, harbors and secret government installations spread across Russia, Libya and into China. Set soon after the original Project IGI, this first-person shooter brings back key characters from the first game and places them in new situations and locations. Throughout three linked campaigns, Jones continues to rely on stealth, rather than firepower, to penetrate and destroy the enemy. Cunning and careful tactics are the name of the game.

The game's protagonist, David Jones,[7] an agent working for the Institute for Geotactical Intelligence and former British SAS operator,[8], was sent to the Carpathian mountains in Russia to recover a set of EMP chips stolen by a group of Russian mafia from a high-tech US facility.[9] After infiltrating the weather station in the mountains and retrieving one of the EMP chips, his mission director (Phillip White) commands him to go to retrieve the remaining EMP chips so that the IGI researchers can launch a full scale research on the chips to determine their real usage against the thieves.

The game continues with him retrieving the chips in various locations in Russia. Soon after, David Jones is betrayed by his helicopter pilot (Robert Quest) and Phillip White; after a series of events, he eventually finds himself at the borders of Romania, where he is then forced to evade the incoming border patrols.

Meanwhile, his former pilot and mission director had escaped. The IGI was not able to detect their whereabouts after the incident, but spent enough efforts to get an important detail that Phillip White had made several weapons and military deals with Jach Priboi in Libya. Under Anya, his new mission director, he sets off to Libya and searches for the middle-aged Priboi, who had been locked up by the Libyan Intelligence as he was supplying weapons to the rebel forces.

After rescuing Priboi and escaping out of the Libyan prison, Priboi states that all the information which David needs are in a safe in his villa, which was at that time being used as a command center by the Libyan general, Major Zaleb Said. David decides to go to the villa to get the information. Surprisingly, after expunging much effort and going through many of gunfights, Priboi discovers that Major Said had taken his papers and he then vows angrily to take them back. He suggests David to take control of the helicopter in his airbase not far away from the villa in order to confront Major Said. They get the helicopter without much conflict, and manage to gun Major Said down amidst the confusion and get the papers back.[10] Upon returning to his villa, Priboi tells David that the trade that he made with David's former missions director was in a seaport in Egypt.

David sets off to the port without hesitation, and discovers that Robert Quest and Phillip White were actually cooperating with an unknown country to operate the chips. David kills his former pilot in the aforementioned seaport, and takes a seaplane to the unknown country and ventures off to the Spratly Islands near China[11], where Anya states to be running suspicious activities throughout the time. What Anya said was quite true; David found his mission director cooperating in secrecy with a Chinese general, whom he found out later to be General Wu Xing, who plans to use the chips to blindfold US intelligence and cripple the powers within.

Later David finds his former mission director Phillip White killed by General Wu Xing himself, as the former accused the latter of killing his friend Robert Quest, who was actually killed by David at the Egyptian port. In Wu Xing's secret weapons lab David Jones gets to know that the General was going to start a "World War III". He then engages in a gunfight with Wu Xing killing the latter.

After some chaos and confusion, David tracks the entire plan location to a large and closely-guarded rocket launch pad, where Anya asks him to disable the system immediately before the launch is made and causes an international incident. With efforts, David then succeeds in preventing the rocket from heading towards its programmed destination and to detonate somewhere safe. Finally, he prevents a major disaster from occurring, and the world is once again safe and sound.