The L2A2 Hand Grenade is a portable explosive that is featured in both IGI games.

Grenades have taken on many forms throughout history. Generally, a grenade is propelled by either being thrown or launched from a device. Those that are thrown use a chemical time delay fuse. Launched grenades use centrifugal force to release retention springs away from the firing pin, which is then released just below the head of the grenade. Upon impact, the head is depressed onto the exposed firing pin which detonates the explosive.

When the pin is pulled, the spoon is released which allows the striker pin to be forced downward by a spring. Upon impact, this creates a small spark which then burns through the chemical fuse in approximately four seconds. At the end of the fuse is a detonator which when ignited, sets off the bulk of the explosive material inside the grenade. This causes enough pressure to blow the grenade apart. The shell of the grenade splinters and is projected in all directions. Both the concussion wave and the shrapnel cause damage to nearby persons.

In Project IGI, throwing distance of the hand grenade depends on how long the grenade is primed, but it explodes on a fixed timer upon tossing. It has a large radius of damage.

Employment range of hand grenade is short in IGI 2:Covert Strike. Effective casualty radius of hand grenade has also becomed small. However, they can now be primed to shorten time taken to explode, giving enemies less time to run away. In the game, maximum capacity of grenades is 3. They can be dropped like a normal item for picking up later. 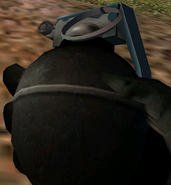 The Hand Grenade in IGI 1. 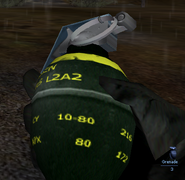 Retrieved from "https://igi.fandom.com/wiki/Hand_Grenade?oldid=12873"
Community content is available under CC-BY-SA unless otherwise noted.