The Flashbang is a harmless explosive that temporarily blinds enemies when detonated. Much like a grenade, it must be armed and thrown, shortly after which the screen will turn white and the player may move unseen. This lasts for a few seconds.

In Project IGI, Flashbang is found on certain locations in the game.

In IGI 2:Covert Strike, Flashbang can only be used in the multiplayer. In the singleplayer mode, however, enemies sometime use flashbang against player, but it cannot be found on their bodies. 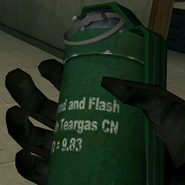 The Flashbang in IGI 1.