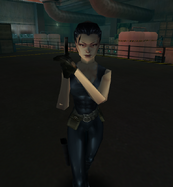 Ekk is the head of an independent Russian mafia who planned to destroy Europe with an atomic bomb. She was the primary antagonist in IGI 1 and was stopped by Jones at the end of the game. She is killed by David (in game) when attempting to stop Anya from defusing the bomb.

Orders the fighter jet transporting Jach Priboi, piloted by David, to be shot down. Flees from secret base to secret base with David close at her heels. Finally killed by David in the last mission.

Kill her with Jackhammer or LAW 80.

"Congratulations.You came this far, Jones, but here you die!!!"

"You have to move faster than than that in order to catch me soldier."

"You will not succeed this time, Jones."

3D rendition. Here she is shown as holding two Desert Eagles, although in the actual game she only uses one.